Dallas-based Match Group is doubling down on romance as Americans continue to get vaccinated and become more mobile – and it wants to invest in safety, too.

In a letter to shareholders, Match said it will invest $100 million in technology and moderation efforts that support a safer online dating experience and build trust with users.

“Our focus is on investing in hiring top product and tech people, working with third-party experts who know the issues best and adding cutting edge capabilities to our platforms to foster secure and safe environments,” Match CEO Shar Dubey wrote to investors.

The Dallas-based company owns a number of massively popular dating apps, including Tinder, Hinge and PlentyOfFish as well as niche dating apps like BLK for Black singles and Chispa for Latinos.

The announcement builds on actions Match has taken to bolster security for users. Earlier steps include partnering with leading anti-sexual violence organization RAINN and making a seven-figure investment in nonprofit Garbo, a criminal backgrounding company that aims to “proactively prevent gender-based violence in the digital age.”

The $100 million investment represents about 4% of the company’s $2.39 billion in revenue last year. Match CFO Gary Swidler told investors that much of the $100 million will be a recurring investment annually and will go toward product and engineering costs.

Match saw strong year-over-year growth in the first quarter of this year, pulling in $668 million in revenue, a 23% increase over the same period last year.

The company anticipates spending more on marketing and advertising this year to draw more singles to its platforms.

“We are in kind of a unique moment in time where, after people have been cooped up in their houses for 14, 15 months, we’re starting to see a path to get back out there and socialize,” Swidler said. “We want to spend into that opportunity.” 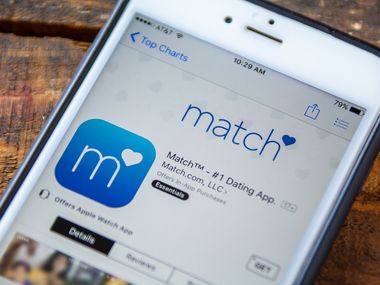 Match Group’s dating apps now boast a collective 11.1 million average subscribers worldwide who pay a fee for premium features, a 12% increase from a year ago.

First-time subscriptions to Match’s dating apps fell in March 2020 as fears about the pandemic set in across the world. Since then, new subscriptions have somewhat mirrored users’ mobility over the pandemic, increasing and decreasing in accordance with lockdowns and surges in cases, according to the company. New subscriptions, however, began to normalize in the first quarter of 2021.

Match has seen upticks in dating activity in the U.S., Israel and the U.K. – countries where vaccination drives are progressing. Dubey warned that virus mitigation worldwide is “still a somewhat fluid picture,” pointing to the “dire and tragic” situation in India, which is experiencing a brutal, deadly surge.

The company expects to close its $1.7 billion acquisition of social media firm Hyperconnect in the second quarter of this year – Match’s largest acquisition to date. It plans to leverage the acquisition to branch out from romantic matchmaking into platforms that provide more platonic “social discovery.”

Seoul-based Hyperconnect operates two apps – one that allows users to meet others around the world and provides real-time translation as well as a live streaming app.

“While our apps have traditionally focused on romantic connections, we do think we can lend our expertise in the area of making meaningful connections among people you don’t know,” Dubey told investors Wednesday.